If Google’s a part of their world, make sure mSpy is a part of yours. It’s the best way to see what they’re saying on Google Hangouts so you can keep them safe from unwanted communication, harassment, or worse. 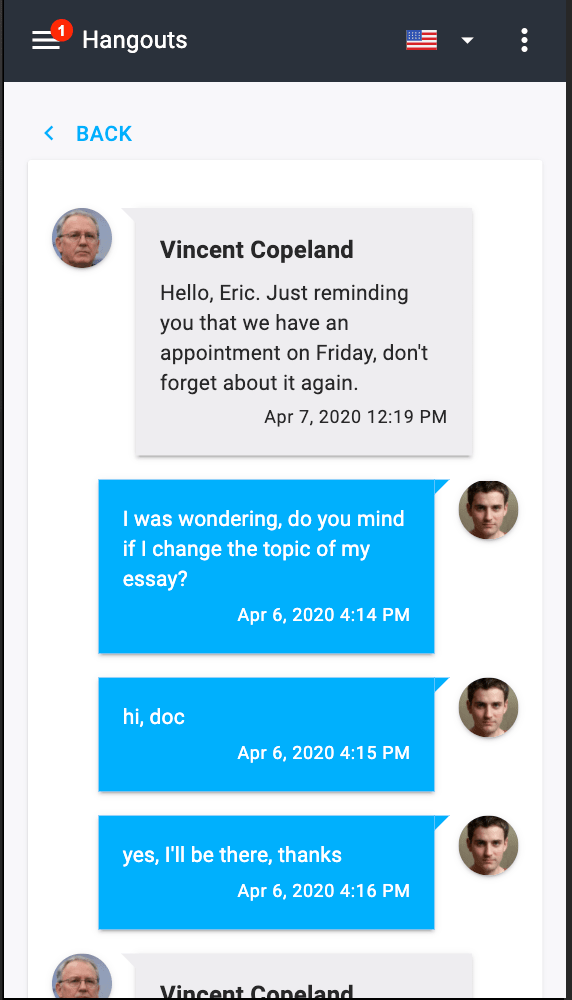 WITH MSPY YOU CAN:
Note: This feature requires Android rooting 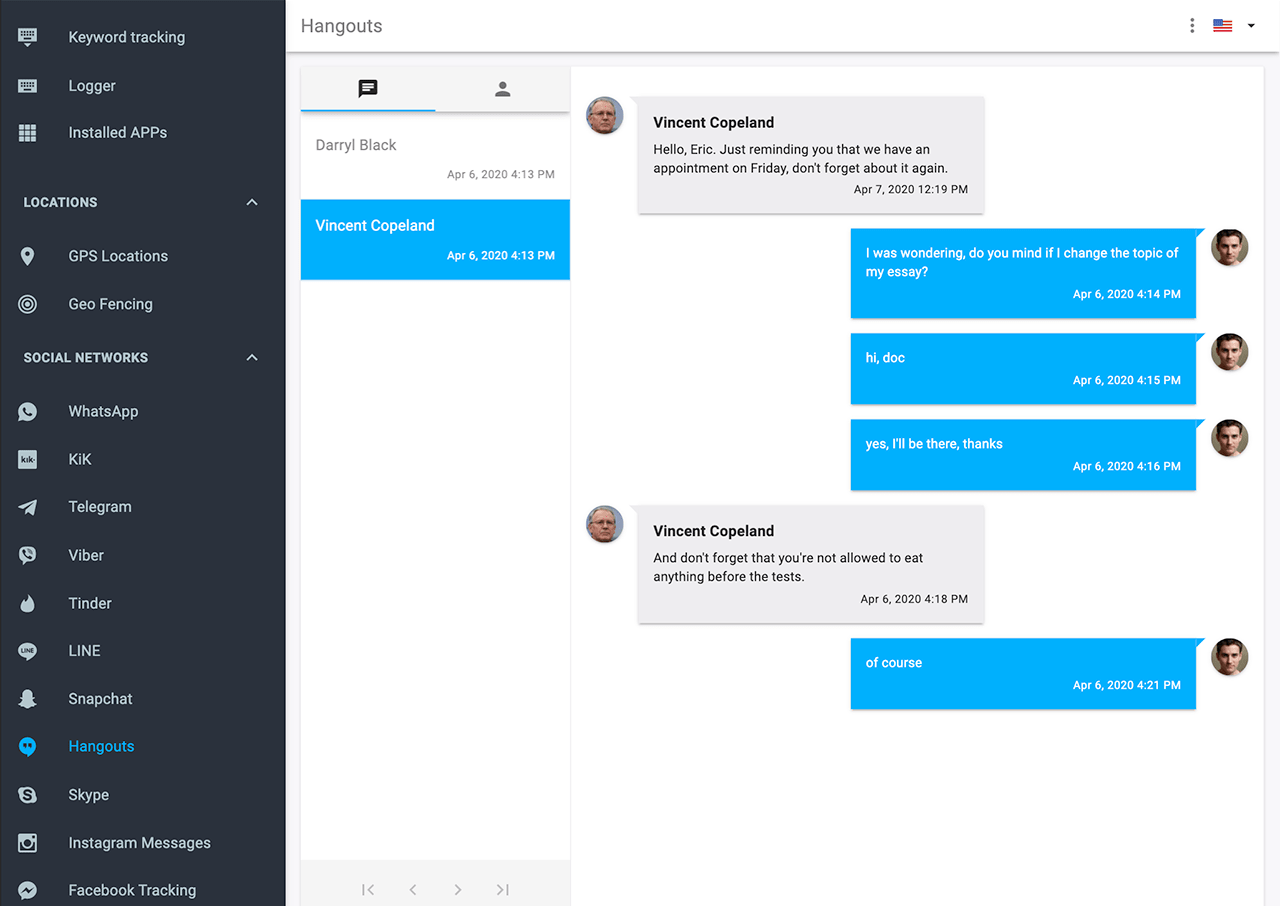 Gmail Hangouts comes standard on all Android phones, which makes it a very popular communication platform. Like any popular messaging platform, it gives predators access to your children. Prevent your children from communicating with people who could harm them. Get every chat, photo, map or emoji sticker sent or received by your child on Hangouts and sleep just a little better at night.

Choose the subscription package that meets the needs of your family and fill out the order form. Once your payment is completed, you will get a welcome email with the mSpy installation instructions.

Follow the link from the email to log in to your Control Panel and follow next the instructions. If you need any technical assistance, contact our 24/7 customer care. Please note: Your target Android requires rooting to achieve the optimum use.

To start tracking Hangouts instant messages, exchanged photos, maps, emoji, stickers, GIFs and to see the other activities on your kid`s device, log in to your Control Panel.

How to Track Someone on Hangouts

Is Google a part of your world? Then there’s a good chance your kids use Google Hangouts. And even if you aren’t an Android kind of family, your kids and teens might still love using the Google chat app, especially if their friends use it. So if you’re looking for info on how to track someone on Hangouts, we don’t blame you.

The good news? You’ve definitely come to the right place. With the right Google Hangouts tracking solution, you’ll be better equipped to keep tabs on your kids and know what’s going on in their life. And that’s the key to keeping them safe and secure in this crazy, crazy world.

Believe it or not, more people than you think. From kids to teens, from full-time employees to contractors, Google Hangouts has become an integral chat tool in many people’s lives. That’s why it’s crucial that your parental monitoring solution is capable of monitoring chats on the popular Google app.

See every message sent and received in Google Hangouts

Did you know that Google Hangouts can be used as the main messaging app for instant messages and text messages, including SMS and MMS? It’s true, and that’s why we made sure our Hangouts spy app lets you see every message that was sent and received. You’ll never miss a message, including messages that might have been deleted.

See their group chats and conversations too

Not all conversations happen between just two people. The wonderful thing about Google Hangouts is that it lets multiple people participate in the conversation at once. When you know how to track someone on Hangouts using mSpy, you’ll also be able to see the conversations they have with others. And not just your child’s messages. We’re talking about every message sent and received by every single participant in that group chat.

Conversations are key to understanding what’s going on in their digital world and keeping them safe. But it doesn’t end there. You also want to know who they’re talking to beyond the chats you can see. That’s why the mSpy Hangouts tracking solution includes key pieces of additional data, including their contact list (names and photos), plus the exact time each conversation took place.

It might be a little weird to think that stickers can tell you a lot about what’s going on in a person’s world. But the truth is people use stickers to communicate with each other and let the person on the other end of the conversation know how they’re feeling or what they’re thinking. When you have a Google Hangouts tracker solution that shows you the stickers they use, you have a powerful tool that’s really a window into their emotions. Perhaps they’re feeling down. Or maybe they want to communicate feelings of love (or lust). Whatever the case might be, you’ll be able to see their stickers. And that can be insanely powerful.

See their emojis and understand how they’re feeling

While stickers are useful in communicating feelings, emojis are more widely used. Oftentimes, emojis are inserted directly within written conversation. That’s why you should make sure you have a Hangouts tracking solution that can actually display emojis. The last thing you want to do is pay for a Hangouts spy app, only to find out that it can only reveal the text they typed, and not emojis.

View the GIFs in their Hangouts conversations

Teens are especially prone to using GIFs when communicating with friends on Hangouts. That’s why you should make sure that the app you’re using can actually show the GIFs they’ve sent and received. While GIFs are often used to convey something funny, they can also be used to convey something that your child might be embarrassed for you to see. But you’re wondering how to monitor Hangouts, not to embarrass them, but rather to protect them. That’s why finding an app that supports GIF is crucial.

Browse their map location in Hangouts

Google Hangouts lets users share their location on a map. When you have a Google Hangouts tracking solution that can display that, you’ve definitely scored. Yes, mSpy also has a location tracker baked right in. But being able to see the locations your child sent and received within Hangouts can provide you with even more insight into their world — and ultimately help you keep them safe.

If you’re concerned about cyberbullying, you need a Hangouts tracking solution in your corner. While Google Hangouts can be used to make plans and chat with friends, children and teens can often find themselves being part of a chat where cyberbullying or abusive chat is taking place.

When you buy mSpy, you won’t just be able to tracking Hangouts convos. You’ll also be able to see what they’re sending and receiving in other chat apps. The parental control monitoring solution is built to work with all sorts of chat apps, so that no matter where they’re chatting, you’ll be armed with everything you need to keep them safe and take action if you notice something just isn’t as it should be. Whether you decided to go with mSpy or not, make sure that the Hangouts tracker you pick works with other chat apps too.